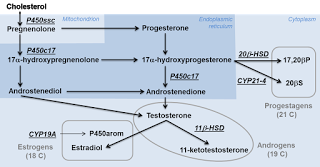 Abstract
This study evaluates the effects of temperature on hCG-induced spermatogenesis in European eel (Anguilla anguilla), subjected to three thermal regimes: T10: 10 °C (first 4 weeks), 15 °C (next 3 weeks) and 20 °C (last 6 weeks); T15: 15 °C (first 4 weeks) and 20 °C (last 9 weeks); and T20: constant 20 °C for the duration of the experiment. At 10 ºC, maturation stopped in the A spermatogonial stage (SPG1), and no further maturation was observed until the temperature was ≥15 ºC. With the aim of explaining these results, the influence of temperature on steroidogenic enzyme gene expression and steroid synthesis was tested. The initial synthesis of androgens (T and 11-KT) increased at SPG1, and was not influenced by temperature. Likewise, the gene expression of the steroidogenic enzymes linked to androgen synthesis (aacyp11a1, aacyp17-I and aa11βHSD) also increased at SPG1. In contrast, no correlation was seen between the increase in E2 and the aacyp19a1 gene expression peak in the testes, with E2 increasing as a consequence of the seawater acclimation carried out before hormonal treatment, and peaking the aacyp19a1 gene expression at B spermatogonial stage (SPG2).  Aacyp21 gene expression was also higher at SPG2, and this stage was only reached when the rearing temperature was ≥15 ºC.

In conclusion, androgen synthesis is not dependent on temperature, but further maturation requires higher temperatures in order to induce a change in the steroidogenic pathway towards oestrogen and progestin synthesis. This study demonstrates that temperature plays a crucial role in European eel maturation, even perhaps controlling gonad development during the reproductive migration.

The first announcement for the 6th AQUAGAMETE Training School has just been published!

You can see the details here: http://aquagamete.webs.upv.es/6th-training-school-rennes-france-june-2016/