The training course “Techniques for germline cryobanking” will take place from 13th to 17th of May, instead of from 6th to 10th, as it was announced.

Our Polish colleague Dr. Andrzej Ciereszko has told us a curious story he had found out during his recent visit to Capitolino Museum (Musei Capitolini) in Rome. 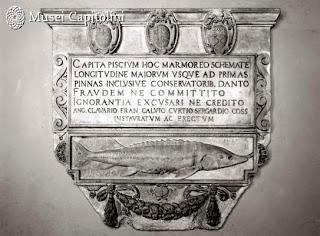 In this museum there is a marble plaque which originally was placed in the “Forum piscium” (fish market) in Sant’Angelo district, where fishermen used to sell their captures during Middle Ages (and where a copy of the plaque is shown today).

The marble plaque shows a 115 cm sturgeon which was used as “regulum”, limiting the maximum size of fish to be sold whole. Those which were longer would have their heads cut off. These had to be given as a perquisite to the Conservatori (the town councillors of papal Rome), who used them to prepare a fish soup.

The plate says: The heads of fish longer than the markings on this marble shall be given to the counsellors, up to and including the first fins. 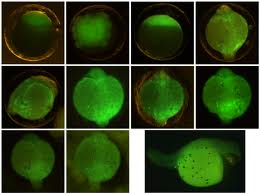 The AQUAGAMETE COST action (http://aquagamete.webs.upv.es/) will fund a training school entitled Techniques for fish germline cryobanking. It will take place in the facilities of the Instituto de Ciencias del Mar de Andalucía (CSIC) in Puerto Real (Cádiz, Spain), from May 6th to 10th, 2013. Dr. Elsa Cabrita is the main organizer of the event. A maximum of 15 students wil be trained on freezing procedures of different type of germinal cells in fish, cryobanking (model species, protected species or problematic species under a reproductive point of view), as well as on standardization of protocols and rules for the statement of results.